What Black History Month Means to Me

By Brandelyn Anderson, Executive Director of For Love of Children

My grandparents were legends, and I had no idea. My Nana was the person who picked me up from school, taught me how to read and write, and forced encouraged me to watch the PBS special “Eyes on the Prize” every black history month-even when I tried to protest. My grandfather was always this larger than life character with an amazing laugh, always the life of the party. However, to the world around us, my grandparents were trailblazers.

In 1968, my grandfather Donald Watson was elected the first Black City Council member in the City of Duarte, Southern California, and the first elected Black city council member in the whole San Gabriel Valley. In 1971, he was elected as the first black Mayor for the City of Duarte and once again, became the first Black Mayor to be elected in San Gabriel Valley. During his time in public office, my grandfather was known for bringing people together from all walks of life and accomplishing things together as a community.

My Nana, Bernice B. Watson, was a tireless first lady. Still, she somehow found the time to co-author the book “On the Duarte,” which, to date, is the only documented comprehensive history of the city. My grandparents were the first black family to own property in the city. Legend has it that my grandmother was able to broker the whole deal without the realtor knowing she was Black until the day they signed the paperwork. At the time, Black families were not even given appointments to see properties in certain neighborhoods, so she did what she had to do so that her children had a home they could grow up in. My mom and her siblings were responsible for integrating the public elementary schools in Duarte, and my grandmother was responsible for ensuring that her kids received the same education as all of the other kids in the neighborhood.

On February 6th, 2020, the City of Duarte honored my grandparents with a renaming of the city’s popular bike trail. This trail came to life under my grandfather’s administration. Now, nearly 50 years after the trail opened, my grandfather accepted the Ceremonial Resolutions and cut the ribbon for the Donald and Bernice Watson Recreation Trail. Surrounded by family and former colleagues, he told the crowd gathered before him that this was the first time in his life that he was speechless. Everyone got a good laugh at that one.

This Black History month, I stand proud of my grandparents. They made incredible sacrifices to ensure that our family was able to accomplish every goal we strove to achieve. I am proud their names will live on in a place where children play, families gather, and their story will always be remembered. Even though my grandmother passed away in 2012, I know she was grinning from ear to ear, knowing that their legacy will live on forever. 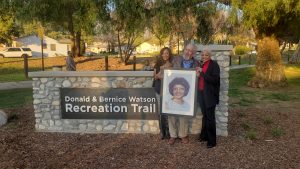 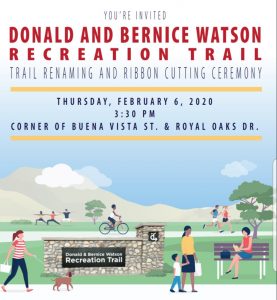 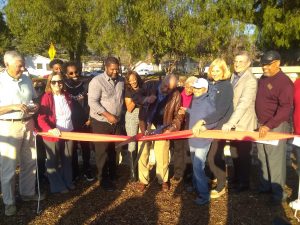 Photos from the Trail Renaming and Ribbon Cutting Ceremony that took place in Duarte, California. For more information, read the article published here.